What a morning, Charlie was stung by a bee while he was playing with his ball on the balcony.  He just popped into the house limping and all.  I was trying to find out what was wrong with him, all this happened in just a few minutes.  My mother in law and I removed the stinger uffff and poooorr Charlie was such a brave little dog.  He was a bit restless but we finally got it out. 🙂  He is sleeping now so all is good.

The weather here has changed from heatwaves to rainy and cold days, so since it has been colder and we are all stuck at home, it gave me the opportunity to make this recipe.  The sausages were brought to my in laws from a dear friend, who is actually from this region of Greece.  The Southern East part of Greece, Thessaly. This is a beautiful Winter and Summer destination Mountain area called Pelion.  I haven’t been there in ages but you can google Pelion, and check out the beautiful Mountains and Beaches in the area.

Usually we don’t add Pasta when making this recipe.  But sometimes you just need to mix things up. 🙂  The last time I made this recipe I added it into Rice and it gave the dish a different spark.  But I thought it would be a great idea to add it into Pasta after watching a cooking show.  You can also add hot pepper flakes to make it hot and spicy. 🙂

It really is a Winter meal and not a Summer one but hey, I eat Soups during the Summer.  hehehe

Have a great weekend everyone!! 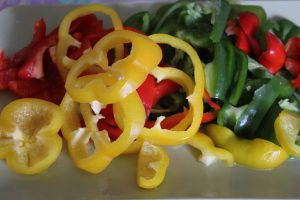 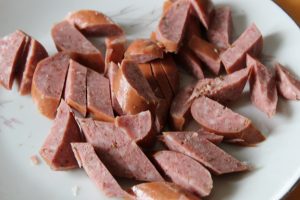 and into smaller sliced pieces. 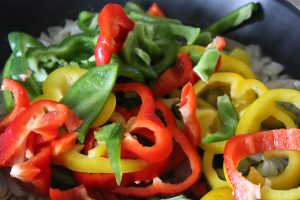 Add Olive Oil into a large sauce pan.  Add in the onions first and then the peppers. 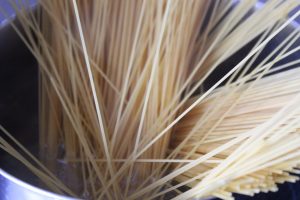 In the meantime boil pasta in salted water. 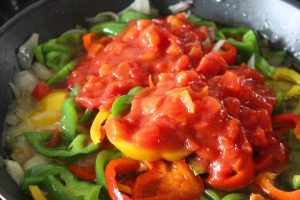 Add tomatoes, salt, pepper, sugar into the sausage mix and let the cook until sauce has thicken. 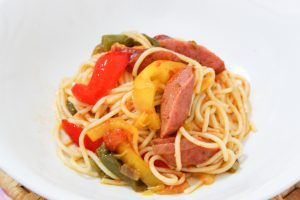 Drain Pasta and add Sausages mix into Pasta and stir.

Welcome to a small corner of my Greek Heritage. Growing up in New York from Greek parents, was a challenge of its own...but the traditional food, tastes and aromas that my mother cooked always travelled me back to Greece. My mother is a wonderful cook, our house would always have that smell of home cooked food. I remember very clearly that we were only allowed fast food, once a week, that was a huge day for myself and my brother. Jumping up and down in the back car seat, laughing, just being kids. It is true that we all like to eat different foods, taste, smell, even try food that looks different than our regular meals at home and I think that is so natural. In my teens, I was not really into cooking, I enjoyed my magazines after school, listening to music, and just taking a breather. There were times that I would glance at some of my mom's recipes, more out of curiosity than to actually try to cook them. At that time I did not realise that cooking would become my passion one day. Slowly, I would start to look into my mom's recipes a bit more each day and I started to find it interesting as a hobby. Each month I would go into our neighborhood bookstore and pick up my monthly book, until one day I decided to stroll over into the cooking section. That summer was the first time I actually bought a cooking magazine....and I loved it. Cooking and baking started out as a hobby, but now after many years it is my passion. Exploring the cuisines, the spices, the oils, the scents, the variety of smells and tastes that exist. It was and still is an amazing journey without limits. So, come along with me on this adventure, and I hope you enjoy my recipes. Sophie

This site uses Akismet to reduce spam. Learn how your comment data is processed.